People often ask me where or how I come up with my ideas for writing. It’s hard to say. I think it’s the wrong question, to be honest.

The right one would be: when did you come up with the idea for this story?

In the case of the Nightmare City series, that must have been almost ten years ago, when I posed a simple theory to myself: what if dreams really did come true? As in literally.

What if those dreams you dream at night manifested in reality?

What about the nightmares?

I don’t remember what triggered those questions. What I do know is that I haven’t written only one story to answer them.

The first was a short story about Santa falling off the top of the Ulm cathedral and traumatizing a little girl. Not just because Santa had died, but because she was the only one who saw it happen. Because, of course, he was a manifested dream, and she one of the few who could ‘see’ them.

The second involved elves and vampires and shapeshifters as dream hunters, who’d come into being by manifestation and had become an integral part of the world. I got about 40.000 words into that novel before I realized it wasn’t going anywhere interesting enough.

So I gave that general idea another twist and – lo and behold – a pilot screenplay for a TV-series was born. It was pretty good, too, earning 7 out of 10 points in the overall rating from several The Black List reviewers.

Alas, getting a TV series made is even more difficult than finding an agent for your novel – really, it is! So I rewrote the script and turned it into Nightmare City, book 1 in the series. It took me about 1,5 years from typing the first word to querying agents with a polished and workshopped draft.

Seven literary agents requested the full manuscript on the basis of my query – woot woot! I was over the moon. I’d never gotten requests for fulls for any of my previous manuscripts. And now seven. I had to be doing something right (if only the query).

Four of the agents sent back a form rejection, but the other three, while also rejections, sent personal and even detailed replies. All three loved the book – just not quuuiiiite enough to pick it up and add it to their already full client list.

Each of them made a few suggestions on how to further improve the book, though, for which I’m incredibly grateful. They helped me understand where the draft was still lacking, and so I went through five more rounds of revision to get it ready for self-publishing.

I believe it is ready. No, I know it’s ready.

I love this story, this premise, these characters. The action, the snark, the promise of romance.

I hope you will, too.

Be the first to receive new blog posts as well as information and publishing details about my books.

Get “Once Upon A Nightmare” for FREE 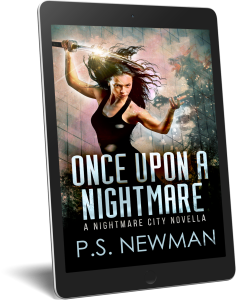 Sign up for my newsletter and be the first to receive new blog posts as well as information and publishing details about my books.