I realized something yesterday: all my writing retreats have been on or near the water.

Baveno on the Lago Maggiore in Italy, Lake Temagami in Canada, the Chiemsee in Bavaria. And now the Baltic Sea. Those weren’t conscious choices, they just sort of happened that way.

Large bodies of water have something magical about them. They’re calming, hypnotizing and meditative, and they invite you to sink deep into the depths of your own mind and imagination.

In other words, ideal for writing.

Being on a cruise ship is a little different than staying in a lake cabin or sitting in a cafe overlooking the water, though. And not because a cruise ship is basically a small town all by itself. Of course there are a lot of people, and you never find a spot quite as quiet and solitary as in the aforementioned lake cabin. But that was expected.

What I never thought of is the fact that, despite us being surrounded by an ocean, with water to the horizon in all directions, we have no direct access to that water.

No way to go for a swim or even just dip your toes in. We’re either inside, looking at it through the windows, or high above it on the open decks 14 and 15. 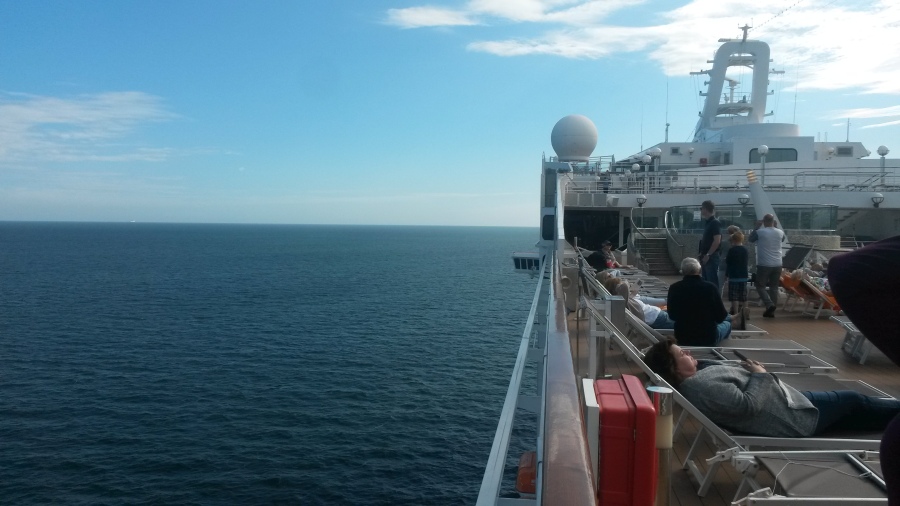 It’s still hypnotizing and meditative. The water is still right there, after all. It’s just not quite as easy to fall into that calm state of mind because there’s always something going on around you, and you’re just that tiny little bit more removed from the element.

But we’re not here just to write, we’re also here to learn and geek out about writing, and that is where this retreat excels. The next workshop takes place in, “Deep Dive on Action”, held by award-winning sci-fi author, former stuntman and martial artist Wesley Chu.

He’s also the instructor for my critique session.

He has read my stuff.

He’ll be giving me feedback on it on Wednesday.

But more on the retreat itself later. 😉