Today (as I’m writing this) marks the end of Week 3 of my Cape Town chapter with WiFi Tribe. Unbelievable!

I’m so glad this is a 6-week chapter instead of the more usual 4-week, because it’s been absolutely amazing and I wouldn’t want it to end next week. Phew!

So here are some impressions, photos and anecdotes of the Tribe’s first three weeks in Cape Town in 2018.

People at home are currently most interested in Cape Town’s water situation: what little is left is rapidly nearing its end due to a severe drought of several years. The rains during the last few winters were simply not sufficient in refilling the reservoirs enough to last through the dry and windy summers.

Interestingly enough, the city of Cape Town is only now taking serious steps to invest in desalination plants and to tap into the aquifers that apparently run plentiful beneath the city. Hoping for rain has been the city’s prevailing strategy for years – but that hope is, at long last, about to die.

This is apparently the first time in history and the world that a major city is under serious threat of running completely out of potable water. “Day Zero”, as it’s called here, is currently predicted for April 16th, at which point the water will have to be rationed out at 25L/person/day. People will apparently have to go stand in line somewhere to pick up their 25 liters.

To avoid this horrific scenario, push back Day Zero and buy some time until the winter rains – hopefully – set in, Cape Town is asking all residents and tourists to keep their water consumption as low as possible. As of February, water is restricted to 50 liters per person per day.

Here’s how we WiFi Tribers are trying to do our part and keep our water consumption down to 50L/person/day:

If nothing else, it’s a lesson in humility and gratitude. I no longer take drinkable tap water, long showers or half-full loads of laundry for granted. Water is essential to so many more things than we often consciously think about. I hope and wish for Cape Town that it soon finds its way out of this impending catastrophe.

Once again: yes, we work. We most definitely work!

Time zones seem to matter more to more members of this chapter than in the others before; a lot of people work for American companies, and therefore have to work from afternoon to midnight-ish, rather than being able to pick and choose their own work time.

WiFi in general is mostly not as good in cafes here as it was in Bali and Thailand. We’ve gone to several super cute places to work and had to leave again and find an alternative because a group of us logging on would crash the WiFi.

But we’ve also found enough beautiful places where WiFi works well enough to work from. Places where we can sit outside on decks and verandas, with ocean views and great, cheap food.

And of course, we have our so-called “Co-Cave” – the garage at the main house that has been converted into an office space with enough charging stations and perfect WiFi. 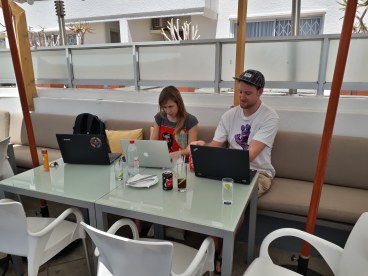 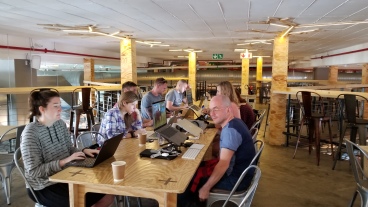 When in South Africa, a safari is a must – obviously. We’re leaving tomorrow, so I don’t have any safari photos to share just yet. Which doesn’t mean we haven’t seen our fair share of critters.

There were the cute penguins at Boulders Bay.

The thieving baboons at Cape Point.

And the posing “dassies” up on Table Mountain. 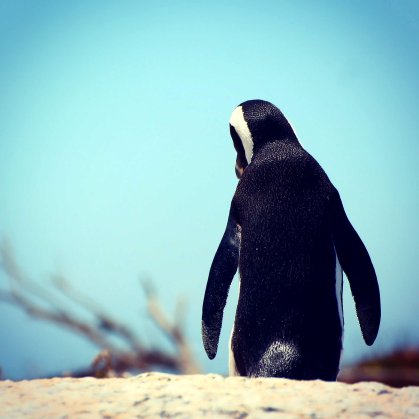 Don’t worry: safari pics will be available in my next post on Cape Town, for sure. I’ll try to keep it to a minimum of the very best ones.

So probably only about 200 or so… consider yourself warned! 😀

Cape Town has so much to offer, I’m really glad we’re here for six weeks instead of four.

And yet we haven’t done the half of it. 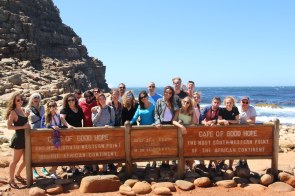 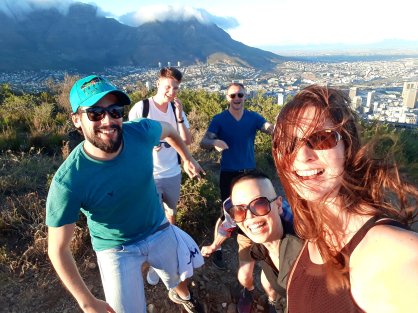 Once again, thank you to all whose photos are also featured in this post: WiFi Tribe / Julia Kallweit, Tanya Huang, Lauren Carey and Kaskazi Kayaks.